The long-awaited soundtrack album of JG Thirlwell‘s scores for the animated series Archer will finally be released in 2023 via iam8bit/DMG.

The album comprises 27 tracks and is drawn from seasons 7-9 of the show. It will be released on maraschino red vinyl.

Thirlwell joined the show on season 7 and was able to expand and build on the Archer universe with his musical stylings. The show won an Emmy Award in the category of Outstanding Animated Program for season 7.

You can advance order the album here 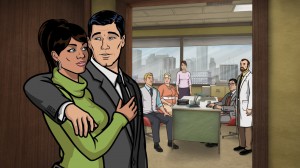