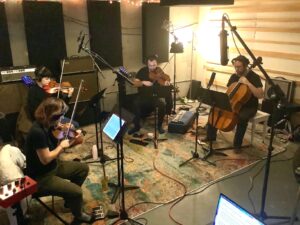 JG Thirlwell has recorded an album of his string quartets with Mivos Quartet. They were initially scheduled to make the album in 2020 but it was delayed due to the pandemic. Recording took place at Shiny Things Studio in Bedford Stuyvesant, Brooklyn with Mike Tierney recording and engineering. The album, entitled Dystonia, was made possible with funding from the Australia Council for the Arts. It should be released in late 2022.