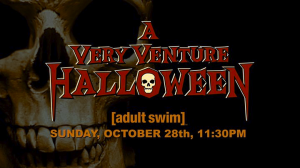 A new episode of The Venture Bros will premiere at 11.30 pm on October 28, 2012 on Adult Swim / Cartoon Network, featuring an exciting new score by JG Thirlwell. Though this Halloween-themed episode is part of season five, the rest of season five will not start airing until 2013. According to Jackson Publick : “Basically, when we did the math and figured out that we probably wouldn’t be able to premiere season 5 until the beginning of 2013, I got super-depressed over the prospect of a Venture-less 2012. Doc was already half done writing a spooky sort of episode that he wanted to take place on Halloween, so we made it official.” Entitled “A Very Venture Halloween”, the episode was created and directed by Jackson Publick and written by Publick and Doc Hammer, both of whom also provide voices for the special.