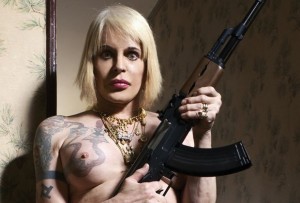 JG Thirlwell will be leading a conversation and Q and A with the legendary Genesis Breyer P-Orridge at an event on March 23 2014 at 2pm at the Rough Trade store in Brooklyn, NY. The event is to celebrate the publication of a new photographic book tracing P-Orridge’s life history. Genesis P-Orridge first rose to infamy as a member of Fluxus and Dada inspired performance art terrorists Coum Transmissions. He went on to form the highly influential Throbbing Gristle with Peter Christopherson, Chris Carter and Cosey Fannie Tutti. After their dissolution he formed the collective Psychic TV which were interested in fetish, magic and ritual. Genesis went on to transform his/her body as a devotee and exponent of pandrogeny, a ‘third gender’ project launched in the late 90’s with wife and life-partner, Lady Jaye, who died in 2007. At the event Breyer P-Orridge will also be signing the book and other related items on sale at Rough Trade.
There are contraindications as in the most drugs of this skincarepillsshop.com group. It may be too dangerous for children, which is evident from contraindications, but it is applied with the lower dosage.