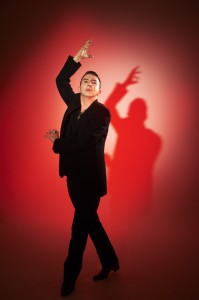 JG Thirlwell will be special guest in a one-off performance by Marc Almond with a 2012 incarnation of his former group the Mambas, when they perform the classic album Torment and Toreros in its entirety for the Meltdown Festival. This year’s festival is curated by Antony Hegarty of Antony and The Johnsons, who was heavily impacted by Almond’s record. JG wrote and played all the instruments on the song “A Million Manias” which appears on that album, and will perform it live with Marc. In addition JG plays on the track “Beat Out That Rhythm On A Drum”.  Antony has said of Almond, ‘Marc laid out a trail of subcultural breadcrumbs and aesthetic tenets that, more than any other single influence, formed the artist that I would become. Ten years before I would hear Nina Simone make a similar affirmation, I read Marc saying that he didn’t care if he hit the notes, for it was only the feeling that mattered.’