JG Thirlwell has been commissioned by Great Learning Orchestra to create a 45 minute large scale compositon, which will be performed live on March 15 2017 at Sodra Teatern in Stockholm. CM Von Hausswolff will open the evening with a solo set.

The Great Learning Orchestra is a collective of over one hundred musicians based in Stockholm, though the version of GLO that will perform with JG will be about 35 players in number. Great Learning Orchestra‘s model is based on that of Cornelius Cardew‘s Scratch Orchestra, combining musicians of varying abilities, from virtuosos to sound-makers. Their objective is to meet up to explore music with listening in the center. They work extensively with graphic, instructional and unconventional scores and the ensemble has a fluctuating size and instrumentation depending on the piece they are performing. JG Thirlwell has already created two graphic scores for GLO and has conducted workshops with them. 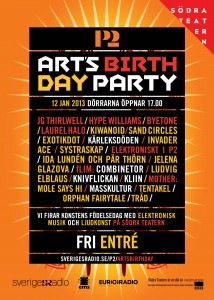 In 1963 the French Fluxus artist Robert Filliou declared that Art was born one million years ago when someone dropped a sponge in a bucket of water. It was supposed to have happened on January 17 and therefore Filliou decided that January 17 is Art’s Birthday. That would mean in 2013 we will celebrate Art’s 1,000,050th birthday!

On Saturday January 12, 2013  JG Thirlwell will kick off the year by performing in his first solo concert in honor of the birthday of art. Thirlwell’s performance will be entitled Cholera Nocebo and will take place at Södra Teatern in Stockholm. All  four of the venues’ stages will be crowded with various performances, noise, electronics, visuals and DJ’s. The admission is free and the concert will be broadcast live on Swedish Radio P2.