This recording was conceived by J.G. Thirlwell and Lydia Lunch as a travelogue and exploration of DUMBO (Down Under the Manhattan Bridge Overpass), site of the notorious Farragut Housing Projects.  These projects have been called the most dangerous in New York City, and J.G. Thirlwell resides and works next to them to this day.

First Exit To Brooklyn (aka York, a reference to the nearby York Street subway stop, also a thematic link to J.G. Thirlwell’s obsession with four letter one syllable LP titles) is a meditation and catalogue of DUMBO’s crime, it’s denizens, it’s violence and oppression, it’s industrial and human waste based on ten years of first hand experience.

It was performed from a lateral libretto consisting of emotive cues and descriptions of form, format and tempo along with pre-composed music themes, which were then fleshed out and improvisatorily elaborated on by an amazing and eclectic ensemble of musicians. Composed and conducted by J.G. Thirlwell, the musicians also took cues from 9 synchronized kitchen clocks – one per member – and each other.

All involved were hand-picked for their empathy, musicality and sensitive, sensuous and swinging sensability; despite the fact that virtually none of them had ever met, the chemistry proved to be spot on.  The narrative was written and performed by Lydia Lunch, who resided in DUMBO from 1987 until 1990 with partner-in-grime J.G. Thirlwell who composed and sang the lyrics.  Both the narrative and lyrics are based on crimes committed on them, crimes observed, crimes against the neighborhood, criminals both reviled and revered and, in one piece, crimes Thirlwell commits upon himself.

York was recorded at the nearby Brooklyn Anchorage, one of the huge stone pillars which supports the venerable structure that is the Brooklyn Bridge.  Within the cavernous pillar, which boasts fifty foot ceilings, are numerous vaults and ante chambers.  While having previously being used to store discarded tires, it was taken over several years ago by Creative Time, a New York arts foundation, who have each summer been curating it to stage and display numerous amazing interactive installations, art exhibits, performances, concerts and raves.

Turn off the lights and hide the razor blades.

Jim Thirlwell’s work has never been for the squeamish add the narratives of Lydia Lunch and the musical muscle of folks from bands like Unsane, Firewater, Boss Hog and Lounge Lizards and you’re in for some demanding times. For York, this eclectic ensemble took a libretto and elaborated upon it with improvisation during its performance. This is one of Thirlwell’s most demanding works to date. It’s a symphony Thirlwell composed about the notorious Farragut Housing Project that is located underneath the Brooklyn Bridge, across from which Thirlwell has lived for 10 years. The lyrics and narratives are based on what he and Lunch experienced while living at the edge of this warzone. Since the characters are real people, these pieces vividly portray, with near documentary precision, the moral lepers, baseheads and thieves that frequently populate Thirlwell’s work. Recorded live with only vague guidelines as musical cues, Thirlwell’s crew does an excellent job of capturing the broken-down setting. Coming full circle, this live recording of York was performed in a concrete space with 50 foot ceilings that just happened to be at the base of the Brooklyn side of its namesake bridge. A homage of sorts that the Brooklyn Chamber of Commerce would like to ignore, York is a tidy package inspired, created and performed all within a square mile of Brooklyn.

Concept album alert: Thirlwell and Lunch turn their attention to the Farragut Housing Projects underneith the Brooklyn Bridge [1] and have a good old wallow in other people’s misery. [Actually, Lunch used to live there, and Thirlwell still does – Ed] [2] Musically, the five lengthy pieces run from Bernard Hermann-styled melodrama to grinding guitar thrash. Alone, the music veers towards the predictable tedium of self-obsessed artcore; with the addition of Lydia Lunch’s ranting voice (and gutteral contributions from Thirlwell) it becomes as boring as the endless litany of misery it so obviously relishes in describing. Examples: “The smell of sour milk and junkies mingles with the smell of death”; “I keep lacerating myself with memories and the demented visions of some woebegotten messenger of the Lord.” By the end, on “Arschficken” (that’s ‘buttfuck’, in American), Thirlwell has reverted to more familiar Foetus mode as he grunts “Gonna take a trip up the Hershey highway.” The evidence suggests that the highway in question is his very own. 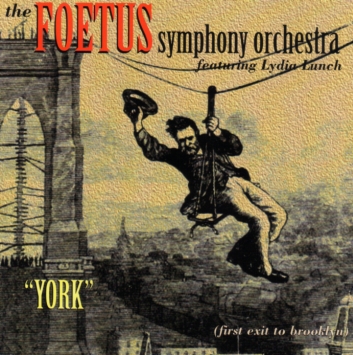