LUCY HAMILTON (on Life In The Greenhouse Effect)

AWAY (on No Joy In Pudville)

HAHN ROWE (on The Smother Brother)

LIN CULBERTSON (on Quilombo and The Smother Brother)

ARTWORK BY THE PIZZ!

Originally conceived as two EPs (hence the inclusion of Quilombo and Life in the Greehouse Effect, which also appear in slightly different versions on Gondwanaland).

The tracks Life In The Greenhouse Effect and Quilombo also appear on the Steroid Maximus Gondwanaland release.

Trancendental Moonshine is the same as Clint Ruin & Lydia Lunch’s Serpentine, without lyrics, from their Don’t Fear The Reaper release.

The LP release did not include any sort of insert.

Imagine Jim Foetus holding Harry Connick, Jr., hostage and forcing his orchestra to play for their lives on a hellbound safari and you’ll have a pretty close idea of this latest release from the prolific psuedonym enthusiast, as Steroid Maximus splay large-scale big music worthy of the densest, most chaotic Looney Tune or 70mm MGM musical. With the absence of vocals, Foetus/Thirlwell’s persona disappears on Quilombo in favor of the all-consuming abstract expressionist efforts of his collaborators-Voivod’s Away, Hahn Rowe (late of Hugo Largo), Raymond Watts and Lin Culbertson-who wield machetes in the guise of charging horns, rumbling  drums, cracking whips, trembling piano and frenetic rhythms that bring to mind Cinemascopic, nightmarish chase scenes. It’s maybe too early in the year, but Quilombo‘s cover art (Thirlwell signing himself The Pizz †) is going on our Best of `92 list right now. Welcome to the jungle: No Joy In Pudville Fighteous, Life In The Greenhouse Effect and the title cut.

† Thirlwell and The Pizz are in fact two different people. 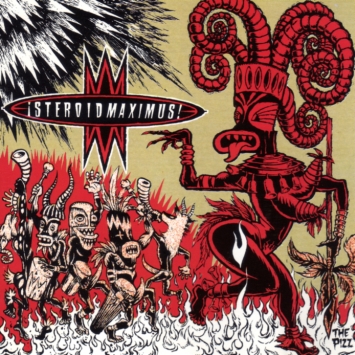