ALL SONGS PRODUCED ARRANGED AND PERFORMED BY SCRAPING FOETUS OFF THE WHEEL.

ALL SONGS COMPOSED BY J.G. THIRLWELL.

DISTRIBUTED BY THE CARTEL.

The Self Immolation/Some Bizzare LP was pressed in 2 editions. The first edition’s cover was printed black after red resulting in a more structured look in the lines being parallel, whereas the second edition’s cover was printed red after black resulting in a less structured look. Additionally, the first edition’s label has  a clean white background, where as the second edition’s label is of a darker white, akin to used paper.

The bonus 12″ was only available with initial pressings of the PVC LP.

2 more of the 5 tracks on the bonus 12″ (Wash It All Off and Today I Started Slogging Again) compromise the Wash / Slog 12″.

Wash It All Off appears in its original form here , as well as on the Wash / 333″ 7″ and the Wash / Slog 12″.  It also appears in edited form on Sink and for a John Peel radio show (available as a bootleg item) done in December 1982 (both edited versions being different from the other).

Today I Started Slogging Again appears in its original form on Deaf.  It appears in edited form here, as well as on the Wash / Slog 12″ and a John Peel radio show (available as a bootleg item) done in December 1982 (all edited versions being different from each other).

The remaining track from the bonus 12″ (Halo Flamin’ Lead) appears in its original form here as well as on the various artists Mad Mix 2 cassette.  It also appears in an edited version on the Sink release.

The PVC CD lists the tracks from the bonus 12″ on the CD sleeve, but they do not actually appear on the CD.

The UK LP included a 2-page fold-out insert/lyric sheet, as did the US LP + 12″, but not the US LP alone.  Additionally, the UK CD’s insert featured the lyrics, whereas the US CD’s insert did not.

The PVC test pressing of the LP + 12″ included a 2-page track listing from Jem records, and came in 2 blank white covers, with blank white Hub-Servall labels; the only identifying features being the catalog # engraved in the run-out.

The 2007 Some Bizzare CD release is digipack format, with remastered audio and re-worked artwork.

WHAT DO we want to hear of pop?

A sense of danger, a danger to the senses, passion (bruised and abused), humour, sexuality. They’re all here, if not as smoothly blended as some might like – a pot pourri rather than a puree. If there’s some less palateable additions – horror, murder, death and disease – it adds to the fatal attraction.  One swig from this will send you head over heels off lover’s leap.  ’Hole’ is somewhere between a terminally sick joke and a masterpiece.

Masterpiece? There’s been enough unwarranted hyperbole splattered on the bathroom tiles of 1984, but in the middle of the confusion, two LPs have arisen that genuinely aspire to classic status.  Nick Cave’s lovesick ‘From Her To Eternity’ (inevitably) was the first; and now rasping, coughing and grunting over its head comes the conflict-charred ‘Hole’.

It’s not the job of Foetus to be the resurrection of modern music (he makes it clear enough that crucifixion’s his addiction) but his flaring human torch act is a brilliant light in this gloom.

But just what is this Foetus?  The maverick spirit that’s manifest itself through Foetus over Frisco, Philip And His Foetus Vibration and You’ve Got Foetus On Your Breath.  There are indeed many faces of Foetus and throughout ‘Hole’, his masks are many and lurid; from (Iggy) Pop parody to torured dictator.  He can be an adept joker, a terrifying atrocity exhibitionist, wretch and retcher; but never a waste of time.

The Foetushow twists and turns the cliches of everyday conversation and the familiar shapes of rock, soul and pop and fashions out of them a new and unique form – by turns funny and horrific, often both at once.  Humour to Foetus is a weapon – and what use is a weapon unless it’s off it’s offensive?

Throughout, there’s scarce a chance for a Foetus to gasp a breath: ‘Clothes Heist’, with its bizarre juxtaposition of found voices and its blend of the relative cacophonies of Einsturzende Neubauten and James Brown, lurches straight into the Iggy parody ‘Lust For Death’.  Mounted on a testy snatch of an organ melody, Foetus spouts forth on the myth of the Pop: Libido in Limbo – Legs Akimbo/Never even read a word of Rimbaud/The walls of my stomach think they’re Jericho/I’m about to meet my MEXICO/Make mine a double TEXACO.

The barb of the parody is that Pop’s mantle of literate figure of self-destruction could rest so easily on the f lesh of Foetus.  He sunk in the commotion not the myth – in railing Iggy, he’s excising a part of himself.

From the heights of satire we’re dropped without warning into the landmined terrain of ‘I’ll Meet You in Poland Baby’.  The ease of the transition from something as superficial as the ‘Rock and Roll edge’ myth to the chillingly realistic evocation of the horror of World World War II is shocking enough in itself.  But even without such cold ironies of juxtaposition, ‘Poland’ is possibly the most flesh-crawling sound put to record.

Presented as a lover’s tiff between Hitler and Stalin, accompanied by the sound of falling bombs and cheering rallies, it recognises the fact that nothing is more pornographic than sentimentality and nothing more terrifying than the banality of evil.  At its climax it slips out as easily, back into the mode of more overt humour in ‘Hot Horse’, with Foetus playing the slobbering hillbilly, hunting for a human headscarf.

The game of flippant humour versus tendchant horror is continued on the second side.

In the analogy: pop music in the ’80s is a tattered circus shooting-stall, the gaudy, peeling paint no longer attractive.  Along the target line run a series of plastic heads, each one more or less the same as the other and for the most part beyond the range of anyone with the guts to try and shoot at them.

As for Foetus – he’s a whole different rolllercoaster.  ’Hole’ will leave you exhilarated, slightly shaken and maybe just a little nauseous.  But more than ready to go through it all again. 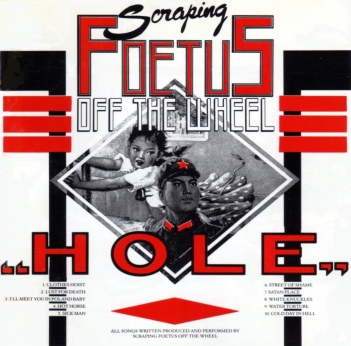