Eight tracks, radically rearranged from the first two Manorexia albums and performed by the chamber ensemble version of Manorexia in arrangements that JG has been performing and perfecting over the last couple of years.

Recorded By, Mixed By – Marc Urselli

Recorded and mixed at EastSide Sound in NYC

One of the most radical musical renegades since his early days in the 1980s as Foetus, JG Thirlwell has been expanding his musical language more recently through collaborations with classical musicians, improvisers and even robots! This CD is the long awaited third installment in his Manorexia trilogy, his most experimental instrumental grouping to date, and presents his dynamic music in colorful chamber arrangements for string quartet, piano, percussion and laptop. The compositions are in turn strongly rhythmical, cinematic and textural, disturbing yet beautiful.

The album features the playing of David Cossin on percussion, Leyna Marika Papach on violin,Elena Moon Park on violin,Karen Waltuch on viola,Felix Fan on cello and JG Thirlwell on samples/keys, compositions. It was recorded and mixed at Eastside Studios in NYC and engineered by Marc Urselli.

“Manorexia was conceived in the year 2000. I began working on the first album on Thanksgiving morning and released it in 2001. It was started as an electronic and sample based project where I wanted to explore a spatial quality not existent in my other work. I released two albums as Manorexia, “Volvox Turbo” and “The Radiolarian Ooze”, both on my label Ectopic Ents and exclusively thru my website foetus.org.

I had wanted to rearrange some Manorexia compositions for string quartet with percussion for some time, and proposed this to David Sefton at UCLA back in 2002, but in course of those discussions we switched to my Steroid Maximus big band.

Eventually I made the first live performance as Manorexia in Russia in 2006. Kenny Savelson at Bang On A Can proposed my going there for a performance at the same time as the Real Quiet trio of David Cossin, Felix Fan and Andy Russo. Real Quiet agreed to be the core of Manorexia for the Russian dates and we augmented the lineup with two violinists and a violist in Moscow. I rearranged some of the Manorexia material to be played by string quartet, piano, percussion and laptop with Ted Hearne.I have since formed separate Manorexia ensembles in NYC and London. Manorexia has played at All Tomorrow’s Parties, The Whitney Museum, Bang On A Can marathon, Brainwaves Festival and several times at The Stone NYC. This album is the product of the first wave of chamber arrangements of Manorexia material.”-JG Thirlwell

Jim Thirlwell created the Manorexia project in 2000 as an outlet for music that wouldnt sit comfortably with either the garish cartoon manoevres of his Steroid Maximus Big Band or the song based thuggery of Foetus. Initilally recorded solo using samples (chiefly strings), the material on this release, culled from the two Manorexia albums to date, 2001′s Volvox Turbo and The Radiolarian Ooze from 2002, is arranged for string quartet, piano and percussion, with Thirlwell himself a discreet presence on keys and sampler.

Thirlwell’s avowed intention with Manorexia was to explore a spatial quality that is not a feature of his usual work, tending as it does towards textural and structural density. These rearrangements are leaner and more dynamic than the original pieces, though some of he epic orchestral excess, always a Thirlwell specialty, gets lost in the process. The new, more sober versions allow a clearer view of his compositional interests, which betray a samplist’s ear for appropriation and mutation of materials. Nino Rota and Bernard Hermann are strongly evoked on “Armadillo Stance” and “Canaries In The Mineshaft”, while elsewhere there are references to minimalism, particularly the more energised work of John Adams (such as the Carl Stalling inspired Chamber Symphony). What saves this music from being mere pastiche is the force of Thirlwell’s imagination and obvious delight in discovering ways that these disparate styles can function together.

That Thirlwell should find himself releasing this album on John Zorn’s Tzadik label (as part of the Composer’s series, no less) is not as great a departure as it may initially appear. A hallmark of his work, ging right back to his earliest Industrial-informed work in the early 1980s, has been its compositional sophistication, even as his persona became ever more outrageous in the 80s and 90s. But easing up on the breakneck attack that characterises the bulk of his music Thirlwell reveals himself to be an effective, often inspired composer.

A man of many aliases, J.G. Thirlwell is the mastermind behind the unclassifiable industrial oddities of the Foetus moniker and all its incarnations.  His instrumental work, which strongly calls upon classical and big-band orchestrations, also has taken many forms, including Manorexia, Steroid Maximus, and the soundtrack for The Venture Bros. TV show.

Whereas Steroid Maximus and the Venture Bros. music veer towards spy noir and cinematic sounds, the sample-based Manorexia material trends towards spacier, textured, celestial works that drift in and out of dark chamber pieces.  On The Mesopelagic Waters, Thirlwell’s first release under this name since 2002, the Manorexia back catalog is re-imagined and reconfigured with the help of a live string quartet and percussion ensemble.

Ultimately, many pieces are as tranquil or sorrowful as their originals, but a stronger sense of drama is present throughout the album. “Zithromax Jitters” is a pulsing, pounding rendition with sporadic piano accompaniment that is even darker than its first version.

Thirlwell’s adventure into the world of avant-classical composition has drawn well-earned praise, and the Australian native just debuted his second piece for the Kronos Quartet at Carnegie Hall.  With another studio album of Manorexia material and a new Foetus release slated for later this year, Thirlwell is staying as prolific as ever. -alarmpress.com

Recently Thirlwell has been channeling his perverse, eclectic vision into an orchestral context: his Manorexia ensemble purveys intricate, sumptuously weird chamber works, nodding both to classical music and Thirlwell’s stylized soundtrack for the Adult swim cartoon The Venture Bros.

JG Thirlwell presented an evening of two sold-out sets of music from his current project, Manorexia, an ensemble consisting of string quartet, piano, percussion, and himself on laptop. If you are familiar with Thirlwell’s solo project Foetus or his fast paced big band project Steroid Maximus, this current ensemble may come as a surprise to you, as it is primarily quiet, sensitive, and dreamy. However there are hints of Thirlwell’s other personalities hidden in the music: as haunting melodies drift over other-worldly harmonies, the potential of violence looms, with occasional bursts of industrial percussion and raw, repeated string figures that cut into the otherwise serene sound. Manorexia’s music always seems to be on the verge of some magical discovery -there is a sense of wonder and amazement as the cinematic landscapes unfold. The most exhilarating and emotionally moving piece, “Chloe Don’t Know I’m Alive” (from Manorexia’s second album, The Radiolarian Ooze), began with a string unison while the pianist bowed a low piano string, emitting a glacial texture. Tom-tom tremolos swelled in and out of the sound as the string tunings shifted ever so slightly, creating immense emotional impact in an already apocalyptic atmosphere. In all this darkness, somehow the narrative of the piece ended up in light, as the harmonies brightened, and bells were ringing.

The performance lasted an hour and change, but flew by in the blink of an eye. Thirlwell and co. performed several pieces from the project’s two records, exploring a vast array of styles even under its more focused approach. There were elements of avant classical, minimalistic ambient, cinematic soundscape, and even a touch of rhythmic industrial throughout the evening’s performance, all with a hint of that no wave edge Thirlwell cultivated in the 1980s. Some pieces were a mere two minutes in length, while others stretched over the course of ten minutes, changing gears several times over. Xylophones were bowed, violas were plucked, piano strings were strummed, and Thirlwell sat behind his desk, triggering a serious of electronics, looming over like a demented hybrid of a conductor and a manipulator. The songs themselves were cathartic. Some were hauntingly beautiful, while others invoked a catastrophic sense of dread that found every nerve underneath the skin. The audience watched everything unfold with an eerie silence, only chirping to burst into unanimous applause as each piece came to an organic conclusion, most often with a series of frantic and muted violin notes. Otherwise, you could hear a pin drop between the layers of sound from time to time, but rest assured, Thirlwell and co. were in complete control of their sonic territory, and wielded their instruments with precision and intent. Manorexia are rumored to have a third album due very soon, so I pray last night’s show was a sign of more performances to come. We’ll keep you posted…

So it’s a performance of fairly creepy, subtly exciting and wonderfully rendered pieces, featuring three lovely ladies on violins, one equally lovely lady on cello, one super chap on percussion and xylophones and whatnot and the foetus JG Thirlwell himself on laptop.

The least noticable part is played by Jim and frankly I have trouble figuring out exactly what is coming from his laptop, but it’s unimportant. The whole thing is easily enthralling enough to pop me out of my Brooklyn Beer induced premature semi-slumber and raise the hairs on my neck. It’s not horror music, but it is subcutaneous and it is impressive in its execution to the level that makes you sick and delirious with awe. It rolls and changes and surprises you. It is a show that finishes with you immediately walking up to buy a CD despite knowing that there is no way it can recreate what you just witnessed. It is one of those rare shows that makes you feel exceptionally lucky to be in a certain place at a certain time.

It is what it is all about. It is why I go out. 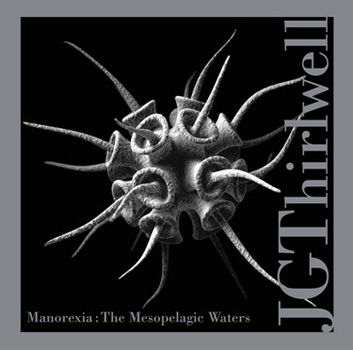