Incesticide is the same song as Somnambulumdrum.

Engineered by Rob Rok Sutton at Unique NYC except tracks 2 & 3 engineered produced and recorded by J.G. Thirlwell at Self Immolation Studios Brooklyn

The Heresy Horns on track 4

The Heresy Horns arranged by Steve Bernstein and J.G. Thirlwell

Massive thanks to Brian Emrich

Null and Void were conceived as companion EPs that released at the same time as GASH. They were later combined into this album. It features many tracks unavailable on other releases plus several remixes of the hit Verklemmt. It also features See Dick Run from the Spooky songs For Kids EP and Incesticide, previously a Reflex magazine flexidisc . Running time is 64:51

Friend Or Foe also appears on the Gash release.

Incesticide also appears on the Mesomorph Enduros compilation release, as well as under the title Somnambulumdrum on flexi disc and on the Gonzo Circus compilation CD.

The Null disc in this set is the same as the Null CDEP released earlier, except this set contains Verklemmt (Vid Mix) whereas the original Null CDEP contains the LP version instead.

Butter appears in the same form on the Null CD and the f cd 15 CD.

The pictures inside the insert, on the back sleeve, as well as on the discs themselves, in the Japanese release, are of JG Thirlwell as a youngster.

For Foetus fans who won’t attempt to categorize his sound, this double-CD EP release proves the validity of their refusal. The nearly radio-friendly sludgery of Verklemmt and the spooky escapism of Into The Light represent both ends of J.G. Thirlwell’s musical spectrum. Herein are such masterpieces as Be Thankful, Verklemmt (Queef Mix), a remix of Verklemmt (the Protecto Mix,which exudes the secret Techno/Trance influences that Thirlwell has been harboring for so long), and Butter, a raucous Rock & Roll romp through Thirlwell’s reduction of his own persona on to magnetic tape. Incesticide harkens back to J.G.’s Wiseblood days with with massive drum and bass pokes. Perhaps the skin-crawlingist of all Foetus tracks is See Dick Run, backed by twisted Romper Room nap-time tinklings and talking-doll dialogue. Thirlwell describes his version of the Dick And Jane children’s book series, replete with Jane’s brains splattered on the kitchen wall. A left-over from the Gash LP sessions, Flux features the Heresey Horns, Tod Ashley (Cop shoot Cop, Firewater), Marc Ribot (Lounge Lizards, Tom Waits), and Vinnie Signorelli (Unsane, Swans), and it looms large detective music gorged with a brass section. On the Blues-y Friend Or Foe (Unhugged Mix), Thirlwell surprises everyone with help from Marcellus Hall (Railroad Jerk) on aching harp. Also included in the set is Iris Evergreen, a nine-and-a-half minute dancefloor throb that only serves to further solidify Foetus as being the obvious Electro-Industrial influence of choice. 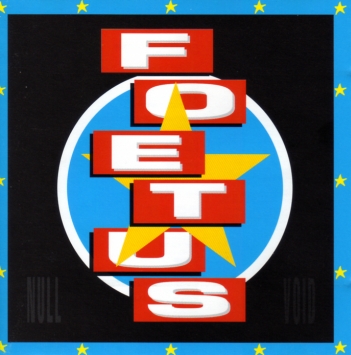