Danceteria LP had a gatefold sleeve and a single-page insert / lyric sheet.

Self Immolation / Some Bizarre LP had a single-page insert / lyric sheet.

The first edition of the GB CD was assembled in the GB, with the CD actually manufactured in Switzerland.

The inspiration for English Faggot/Nothin’ Man came from a harassing message Thirlwell received on his answering machine.

MANY A Foetus has washed under the bridge since the emergent J.G.Thirlwell announced: ‘Mother, I’ve Killed the Cat!‘

But there is none so furious as the Foetus Interruptus. Oh sure we’ve stripped down to the Foetus of Excellence T-shirt and pulled from the Foetus box such feisty corkers as Foetua Uber Frisco, Scraping Foetus Off The Wheel, the Foetus All-Nude Revue, Wiseblood, Foetus Art Terrorism, and You’ve Got Foetus On Your Breath.

But whereas the All Nude revue Bedrock 12″ might’ve led us to think that ol’brown eye was back but bland, the Interruptus interrupts us with Thirlwell’s sickest excesses yet. (And that’s ‘sick’ as in gross black humour, enough to overflow the anal-canal brains who hope that a little Foetus might rub off on them).

Yessir, every bar here is a Tet offensive of the senses. Jimbo lays waste to his brief Las Vegas career (Bedrock) with a single scythe of his pigsticker on the opening ‘Don’t Hide It, Provide It’. He want meat on a plate-NOW-to the accompaniment of various bad motorcycles, machine gunrounds, and the jackhammer Furo-disco that he has co-opted into a devilish trademark. Except this time it turns tighter, like a noose on the ankles. Because Foetus is hopping mad, and still no vegan.

‘English Faggot’ would appear to be the first publication of a hitlist, and the one who abandoned him on the Blackpool pier- I don’t like being left in the sun- is risking dismemberment even just by listening to this cut. Thirlwell apparently hates England, as it applies to his work (biz spoonfeeding the music public with slush), so he reserves particular fury for this enemy. One of the essential Foetus statements is I see no reason to take responsibility -part of his avowed ‘positive negativism’, whereby he takes the opposite stance to please and nobody else. Spurning the charity free-for-all, the Foetus diverts his energies into attempting to repel those who might offer HIM a little charity.

Like the horrifically detailed ‘Hauss-On-Fire’, whereby he relates a first-person Klansman loot’n’burn fairytale just to see who sticks a head over the parapet to yell: Sick! SICK!!! Oh yes. And response is inevitable. So Foetus digs in a little deeper.

Big deal? Maybe, but it’d still be nice to see him flogging a few of those Hole posters outside showings of THE LAST TEMPTATION OF CHRIST (he starved himself for six weeks to ‘look right’ on The Cross).

The going gets weirder on Side Two. And Mr Weird gets going, ‘Chingada’, screamed in Spanish, backed by a punjabi-sounding raga with hammering drums overhead. All preceded by such scene-setting instrumental pieces as ‘Fratricide Pastorale’ and ‘Barbwire Tumbleweed’.

And he rounds it off with ‘A Prayer for My Death’, one way outta here with only a napalm aftershave headache for comfort. Bullshit is obligatory/ daily life is dysentery… I need a release/ say a prayer.

The Foetus has landed, shit-faced, sweating, raw and alive. Give him a good home and keep smiling. (8)

Thanks to Villene for transcription.

Another swinging Foetus-wrecking ball. Threatening and explosive, Clint Ruin’s latest, Thaw, is a mixture of styles all with that Thirlwell rumbling, abrasive edge. The album taken as a whole pulsates with boom then swirls with strings. Vocals roar and chill on the authoritative Don’t Hide It Provide It – (If you don’t stop houndin’ me I’m gonna be poundin’ thee). Classical themes are interwoven throughout the LP, especially on Asbestos with its Stravinsky-like siege laid over a horror movie soundtrack and Fratricide Pastorale, an instrumental dirge. Dipsomaniac Kiss is probably the closest Foetus Interruptus will get to a lounge act with the walking bass, bluesy piano and lamenting guitar building into a climax of perilous feedback and big band horns. With !Chingada! Indian melodies and percussion are set with scream and stomp. The album wraps up with the eerie A Prayer For My Death, a hope for release from this earthly alcatraz to the eternity of demise. Not for those weak at heart. 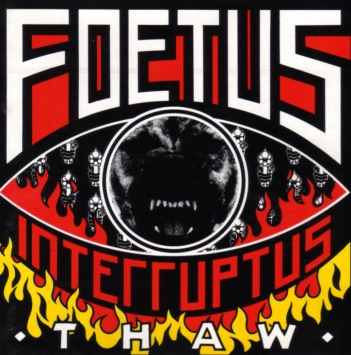