Jim Thirlwell, aka Clint Ruin, Wiseblood, Steroid Maximus and (more famously) Foetus, has crawled out of the chemical hellhole he apparently fell into some years ago.  On first hearing, Flow does as its title says and washes over the listener, who feels he has somehow heard it all before: the usual tightly screwed and sampled arrangements, cranked up high and topped with his ever present, snarling, bad boy vocal.  Granted, Flow‘s torrent of words is Thirlwell’s familiar angsty blurt of near operatic proportions, but closer attention reveals his skill as an arranger, producer and rhythm sampler is now verging on the monumental.  On Flow, the jackhammer beats are superimposed over wild and unpredictable bold, brassy big band jazz melodies, high energy electronic ticks, mariachi licks and Hitchcockian soundtrack snatches.  A typical Foetus blast of ‘in yer face’ confrontationalism, “The Need Machine” subliminally welds traces of early Kraftwerk into the jukebox undercarriage of something resembling the giant killer chicken robot in Robocop.  Also excellent is “Kreibabe”, an Alice Cooper-styled shock rocker, Welcome To My Nightmare era, where various states of musical madness (from nursery rhyme chime to full metal mastication) ebb and flow over Thirlwell’s treated vocal until a peak is hit and the song crawls back into its corner.  Possibly autobiographical, “Kreibabe” is an astonishing, frightening and moving exploration of the effects of mental illness.  Here, Thirlwell drops his guard – his defence wall of lyrical cliches – and comes out fighting.  Flow sees Foetus back on his feet and ready to kick ass.

If you thought that Foetus, a.k.a. J.G. Thirlwell, a.k.a. Clint Ruin, would return from his self-imposed exile like One Flew Over the Cuckoo Nest’s lobotomized and placid Randall McMurphy, guess again. Malicious cliche inversions and dour lyrics like “buckshot methodology” and “a marriage made in the emergency ward” indicate that Mr. Foe to Us hasn’t mellowed or grown sentimental on his latest CD, Flow (Thirsty Ear). He reclaims the throne from heirs like NIN with the brutal garbage-disposal industrial rhythms of “Quick Fix,” but also stretches out with the “psychological symphony” of “Kreibabe” and the swooning big-band jazziness of “Cirrhosis of the Heart.” There’s a cinematic grandeur to Flow, which is elaborately layered with unusual contrasts, like the way Hahn Rowe’s violin slithers beguilingly through the cold ghost-chain rattles of “Mandelay.”

Another barrage of brass, big beats and crass jokes.

Either Foetus has gotten much better at what he does, or it’s been so long since he dropped a major release that his “style” has actually been missed. Either way, Flow is a great summer dance-party disc for those with an emotional core built of throbbing, unresolved misanthropy and a burning need for blaring brass charts and snarky puns. This is the best Foetus record in about 12 years. It’s got all the pounding beats and twisted big-band aggression of classics like 1984′s Hole and 1985′s Nail, without the emphasis on guitars that marred later efforts like Rife. 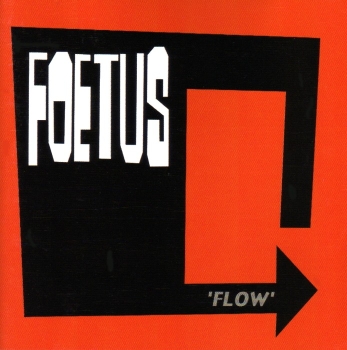