all songs composed by THIRLWELL

Ache is a You’ve Got Foetus on Your Breath album first released in 1982 on Self Immolation Records. Thirsty Ear reissued the album as a CD in 1997 in the US. Both releases were limited editions: only 1,500 copies of the LP and 4,000 copies of the CD were produced.

The Ache LP is Self Immolation #WOMB OYBL 2. The CD re-release is Ectopic Ents #ECT ENTS 013.

FROM THE moment the needle hits the record; ‘Ache’ seizes you by the lapels and shakes you all the way through to the dying echoes of the run-off groove.  Foetus notwithstanding, it’s the proverbial breath of fresh air.

YGFOYB’s first album ‘Deaf’ came out last year and there followed a succession of shorter vinyl works by various Foetus permutations, masterminded by San Francisco based Frank Want, and I’ll be searching them out.  But on the evidence of ‘Ache’ alone, Mr. Want is Major Talent…as in Frank Zappa (’68-’69), The Fall, The Residents and Chrome.  Their records never soothed and reassured, but harangued, amused, amazed and enlightened.  Frank Want and the mysterious others who compromise Foetus are visionaries to the same degree.

From the Onward March of Sino-Soviet Socialism circa Korean War style sleeve design; one might conclude this album to be a hotbed of Un-American Activity.  You’d only be half right. Other institutions in for a rough ride include religion, power, ambition, the bourgeoisie, puritanism and mediocrity.  Soft, familiar targets, to be sure, but such is the overwhelming venom of Foetus’ derision that you feel they are seen as mere manifestations of a deeper flaw in man’s soul.

‘Ache’ is possessed by a bristling, maniacal intelligence which spews out a jostling, surreal collage of subverted musical and verbal cliches, wired word associations, epigrams and sheer invictive with frantic urgency and gleefully black humor.

‘Ache’ is one of the most violently original and compelling records I’ve heard in ages.  It would make an ideal Christmas present.

THE COVER is a tacky visual dose of red and black linear geometrics constructed across a grey-toned pic that shows a Red Army barber cheerfully shaving an ear off a (Red?) infant. The music begins with an equally sadistic glee an optimistic tune entitled ‘Dying With My Boots On’.

This is another instalment in the new soul less vision. Foetus (we’ll talk of him/them/it as a man) wages a ghoul’s crusade, galloping across the corrupt territories of popular music (and related industries) with a two-fingered thrust of disregard for both elsewhere hallowed traditions and his own personal safety.  ‘Ache’ is approximate musical equivalent of a human torch. Going up in a self-destructive blaze of glory.

This record is a ‘progression’ from the dentist drill gratings of Deaf (a previous LP) and the Dada ( ish) marketing strategies of Custom Built For Capitalism.

Sometimes ‘Ache’ seems to get too speedy and clever. Through the clout happy percussive jumble and the disharmonic muddles of melody, Foetus spins around in decreasing circles of hectic lyrical witticisms. ‘Ache’ is a collection of ten brittle non-pop songs emerging from the kind of Being who would share a meal of iron cutlets with Einsturzende Neubauten.

For some reason I prefer side two and my favourite snippet is a jumpy little firecracker called ‘Get Out Of My House’. Kate Bush also has a song on her new LP which has this title. Ponder for a while on the startling possibilities of the pair forming a duet and consider the writing of my former flat mate, Colin Wilson, from his cult novel Adrift In Soho:

If you live in a world that bores you, any sort of violent accident seems like a change for the better, and a newspaper headline announcing the death of a politician or the discovery of another mass murder in Austria produces a pleasant sensation of movement.

Although some may dismiss Jim Thirwell, aka Foetus, as a confrontational, rabble-rousing noisemaker (which he is), his eccentric and wide-ranging talent is usually overlooked; the trouble is, most listeners simply don’t have the patience to find Thirwell’s genius amongst the deranged sound sculptures that are his songs. Ache, Thirwell’s second album (recorded under the You’ve Got Foetus on Your Breath pseudonym), sounds like it was recorded in the same time and place of its predecessor, Deaf, and bears exactly the same top-heavy, abrasive production stamp of that album. Seemingly a musical omnivore, Thirwell devours everything — from swing to Krautrock — and spits it back out in a scrap heap of sonic chaos, twisted beyond recognition. His oblique yet subversive lyrical themes don’t make Ache any more palatable for the faint of heart. This is the sound of unfiltered imagination, absolutely unencumbered by notions of commerce or accessibility. Brilliant. 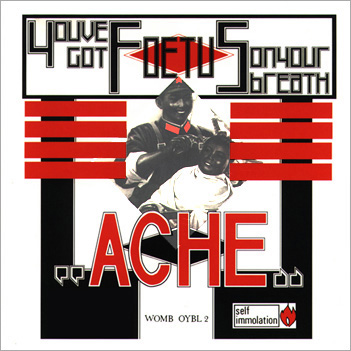