A1 Theme From Pigdom Come
A2 The Throne Of Agony
A3 !
A4 Pigswill!
A5 Descent Into The Inferno
B1 Enter The Exterminator
B2 DI-1 9026
B3 The Overture From Pigdome Come
B4 Private War
B5 Anything (Viva!)

ALL SONGS WRITTEN, PRODUCED AND PERFORMED BY SCRAPING FOETUS OFF THE WHEEL

MIXED AT LIVINGSTON AND CRESCENT STUDIOS

The WOMB FIP 4 CD release was assembled in the GB, but the disc was
actually manufactured in France.

A Self Immolation newsletter states this as forthcoming Mid 1985. ‘Reflex’ magazine’s discography states the initial release was in Oct 1985.

The track “!” is actually the ~3 second cacophony at the end of “The Throne of Agony”, and was incorporated into that track (track 2) on the Self Immolation/Homestead CD release, thus when playing that CD the player will indicate there are only 9 tracks. The Some Bizzare CD release is not guilty of this consolidation, and neither
is the Thirsty Ear CD release.

“Pigswill” is mis-spelled on the Self Immolation/Homestead CD release track listing on the disc itself, as “Pigswell”. “Anything (Viva!)” may or may not refer to a girl Thirlwell had a crush on in elementary school, named Viva. In one interview he stated he would serenade her with renditions of Elvis Presley’s “Viva Las Vegas.”

The 2007 Some Bizzare CD release is digipack format, with remastered
audio and re-worked artwork.

Nail is possibly the best Foetus album; it apparently hopes to piss off all potential listeners by working through as many warped sounds and styles as possible. Though Thirlwell’s sense of humor is sometimes hard to take (check the faux-cinematic “Theme from Pigdom Come” and “Overture to Pigdom Come”), the sheer range of this music is hard to believe. -Keith Farley, allmusic.com

Nail focuses, Ruin observes, feels-ruminations of hellish, turbulent death, agony, murder and down, black-mind opens and lets loose the darkness. Music soars, crashes, AGAIN. AGAIN. AGAIN. “Descent Into The Inferno” pops, rolls, reels, tumbles down and up, up, up and around and ends…Death as glorious end to hellish agony, “Enter The Exterminator”…Music: “The Theme From Pigdom Come” “Private War”…Words: “Isn’t it a pity what a town without pity can do” “I can do any goddamn thing I want”…Satanic poetry. Airplay? The Horror, The Horror…CMJ New Music Report, Issue# 82 (20 Dec 1985), author unknown. 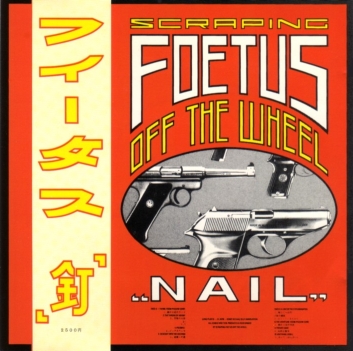