CD:
Another Novel by FOETUS and CHROME CRANKS.

Based on an original composition by Dick Uranus © 1979.

Performed, Produced and Engineered by J. G. Thirlwell at Self Immolation Studios, Brooklyn, NY and The Chrome Cranks at Funhouse Studios, NYC, NY.

A picture disc split between Foetus & Chrome Cranks, with each artist contributing their version on one side.  Track originally credited to Dick Uranus, 1979.

A 4-track CD split between Foetus & Chrome Cranks (the other 2 tracks being Chrome Cranks’ version of “Vice Squad Dick”, and their cover of Tom Verlaine’s “Little Johnny Jewel”).

“Outside Of Time” originally by Von Lmo / © 1980 Advance Yourself Music.

More than musical ingenuity or lyrical wit, it is attitude which powers the new split EP between Chrome Cranks and industrial legend Foetus. The title track, which both Foetus and Chrome Cranks cover separately, was allegedly recorded in 1979 by the mysterious Dick Uranus, who has since disappeared. The song is a cartoonish distillation of the life of a detective, built on a straightforward guitar riff and complete with over-the-top swaggering lyrics: “I’m a hard-boiled dick/Stiff as a policeman’s nightstick.” Foetus uses a deliberate yet compelling beat, simple guitar playing, and some wailing sirens to capture the essence of Dick, while Chrome Cranks, who formed in Ohio and now live in New York, employ hugely distorted bass and guitar, and a snarl reminiscent of Jon Spencer (bassist Jerry Teel’s bandmate in Honeymoon Killers) on top of a skittering, slightly jazzy drumbeat. But the two other tracks rock with almost enough bravado to outdo Dick himself. The Chrome Cranks’ treatment works well on “Little Johnny Jewel,” a Television cover which Chrome Cranks convert into a noisy blues epic. And “Outside Of Time,” Foetus’s tribute to the interdimensional and enigmatic Von Lmo, is uncharacteristically sloppy and mighty loud, with space-age vocal effects that complement Von Lmo’s one-riff songwriting. 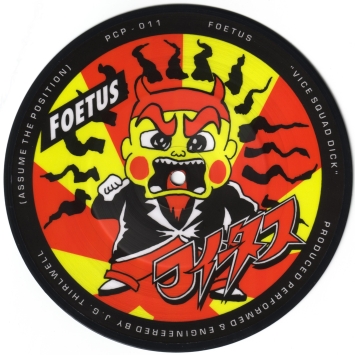 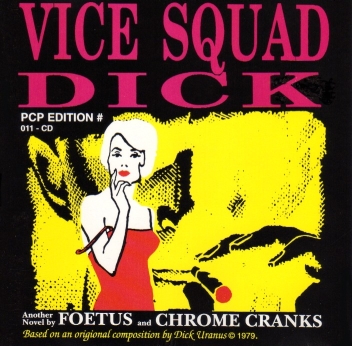