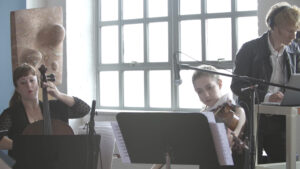 A new video has just been published  on the JG Thirlwell YouTube Channel of a string quartet performance of the Manorexia classic ‘A Plastic Island in the Pacific‘. It’s from the concert ‘JG Thirlwell : String Quartets’ at the Noguchi Sculpture Museum in Queens, NY on August 9 2015. The concert was presented by Bang On A Can. You can watch the video here.

The quartet consisted of Adrianna Mateo on violin,  Elena Moon Park on violin and trumpet, Isabel Hagen on viola and Clara Kennedy on cello. Live electronic treatments and manipulations were performed on the instruments by JG Thirlwell. 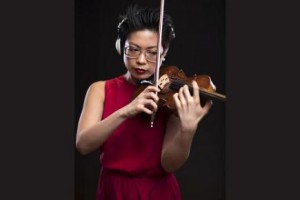 Violinist Adrianna Mateo will play a violin and piano version of JG Thirlwell‘s classic Manorexia compositon “Armadillo Stance” in a solo concert at the Metropolitan Museum in New York on October 23 and 24 2015. The shows will occur between 5pm and 8pm in several sets, and are at the Balcony Bar. Admission to shows is free with entrance to the museum.

The piece was rearranged for Ms Mateo by Thirlwell himself, at her request. The concert will also feature Mateo playing selections from Brahms, Ravel, Debussy, Phillip Glass and Schumann 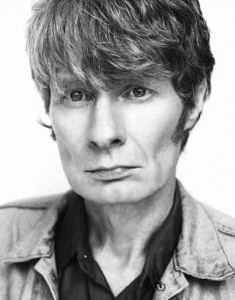 JG Thirlwell will be presenting a program of works for string quartet, including a world premiere and a NY premiere, on the afternoon of August 9 2015 at the Noguchi Sculpture Museum in Queens, NY. He will join the quartet for the last piece of the program, which will be for string quartet with electronic treatments. The quartet for the concert will consist of Adrianna Mateo and Elena Moon Park on violins, Isabel Hagen on viola and Clara Kennedy on cello. The concert is presented by Bang On A Can. The concert will be at 3pm. Admission is free with entry to the museum. 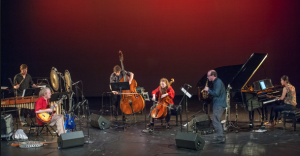