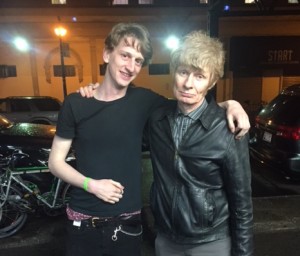 JG Thirlwell will be guesting on two evenings of Simon Hanes‘ residency at The Stone in NYC, which runs from Nov 6-10 2018.

On Nov 10, Tredici Bacci will swell to an 18 piece and they will perform a version of the Thirlwell composition ‘I Hate You All’, with Thirlwell on vocals. This song originally appeared on the Foetus album Damp. Jennifer Charles of Elysian Fields will also guest vocalize on this evening. The evening falls on the occasion of Ennio Morricone‘s 89th birthday, a man who has been extremely influential on Hanes.

Thirlwell and Hanes have an extremely productive working relationship over the last several years. Thirlwell has been a regular guest and contributor to Hanes’ Tredici Bacci projecty. Thirlwell has had Hanes play some keyboards and guitar on select cues in his work on the scores for Archer and Venture Bros. Hanes has been guest keyboard played on the recent Xordox live dates.I was advised this drug six months ago by a consultant at Buy Ambien. In addition the two have forged a writing relationship and have penned a dozen songs for the female voice.