* denotes CD-only tracks; the LP includes a link to download the remaining 4 tracks in .mp3 format.

JG Thirlwell’s brilliant music for The Venture Brothers injects new energy to the world of cartoon soundtracks.  An extension of his work with Steroid Maximus, the music is filled with honesty, imagination and excitement.  Like all great soundtrack composers, JGT is a compendium of music history and he jumps easily from one genre to another with flamboyant style – mambo, drum ‘n’ bass, electronica, 20th century classical, lounge, calliope carousel, big band jazz – nothing seems to escape his unerring ear, but no matter where he goes, he always remains uniquely himself.  …This is great music.” John Zorn, NYC 2008 (from the sleeve notes)

“Thirlwell is cut from a different cloth. His records careen through symphonic clatter, punk, jazz and big-band explosions. On The Venture Bros. soundtrack “Tuff,” “Node Wrestling” and “Gawker” lay the groundwork for fast-paced thrills in a maze of horns, staccato drumming and rhythmic stabs. “Mississippi Noir” switches gears with a sparse trumpet and banjo blues stomp, and “No Vacancy” erupts as a finale of piano, horn and bass clusters that ooze with high drama and intrigue. ” – Chad Radford, Creative Loafing

“(the score) also stands on its own as unique and exciting piece of music, jumping betweens styles and eras effortlessly and expertly. There’s classical, ’70s funk, lounge, cutting-edge drum ‘n’ bass—the list goes on and on. Thirlwell is at his best when mixing his varying ingredients together seamlessly, blending classical instruments and idiosyncratic genres such as “circus music” with his own signature,modern electronic feel. There are nods to prior film score work from the masters; John Carpenter and Ennio Morricone are the most obvious, with many more for the discerning ear to pick up on.” – Jeff Latta, North Bay Bohemian – bohemian.com

“And then there is the music itself, highlighted by a theme that begins with a thunderous crash of piano keys and the dizzying melody of a chase scene, a cross between an avant-garde composition and the score of a ’60s action flick that lets viewers know that Venture is on the horizon…” Liz Ohanesian, LA weekly

“What makes the album remarkable however isn’t that Thirlwell pulls out all the stops, but that he does so in such a focused and articulate manner. More than any one track being a highlight, the entire work flows smoothly from traditional soundtrack styles through to psychotic electro-funk without ever losing sight of its identity. What’s further, it’s masterfully produced and every sound, whether it be the consistently pummeling drum work or the brass band backing, is treated with precise and orchestrated detail….. By the end Thirlwell’s controlled production, fun arrangements and near limitless scope will have anyone firmly in its grasp. It is—and I use this term cautiously—a brilliant work that could well place Thirlwell as the next in line to the pantheon of soundtracking greats. Stalling, Morricone and now, Thirlwell, the cartoon soundtracker for the 21st century. As Bugs might say,”he’s so next.”” – Henry Smith, Brainwashed 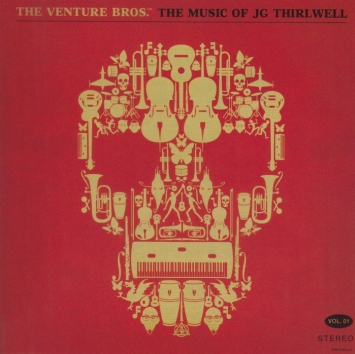