A. Oh Hook
B. Ecclesiophobia

When I first saw the grotto where I was supposed to play I realized that just playing in there wouldn’t be enough. That long hole under the town of Santarcangelo required a special interaction. It’s shape suggested a similarity to a polygon, so I decided to act musically as if I were to shoot a target on a rifle range. The bottom of the cave became the target which I hit with sounds thrown from two amplifiers placed on the opposite side of the space. Sounds bounced back in a long and natural reverb and were captured by several microphones placed along the length of the grotto and processed in real time. This backlash constantly created different sonic paths that I responded to, adding guitars and other instruments. I threw several different kinds of sounds at my “target” : cello and other strings, guitar and vocals. This is an extract from the various recordings I made during the three days I spent in the grotto.

I was invited to make a site-specific “sound action” in the historical center of Santarcangelo in Italy. The location was in a cavern which is tunneled into the side of the mountain. The hill of Santarcangelo is riddled with these caverns that burrow deeply down. The air inside is dank and damp, the walls and floor are dirt. The room at the end of the cavern’s corridor had a vaulted ceiling and a dirt floor. From the centre of the vault I hung a water bottle upside down with an intravenous drip.

This signal triggered a low frequency via a side chain of a noise gate, which I sent into a subwoofer in the next room . This subwoofer was positioned beneath another bass drum, which was also positioned horizontally with a pool of water collected on the head of the drum. This drum also had a light beneath it. As the low frequency vibrated the drum head, this also made the water ripple, which was reflected onto the ceiling.

This created a visual magnification and representation of a sonic event from the small gesture of a drop of water.

In the main room I also had four speakers positioned around the perimeter. During the installation I performed and improvised around a composition consisting of bell like tones, and churchbell recordings I made in the courtyard outside the grotto. I had brought the church underground.

This piece was entitled Ecclesiophobia, which means fear of churches. The place seemed like some kind of consecrated environment . It’s not too much of a stretch of the imagination to think that this place was once a dungeon, or harbored some kind of nefarious operations.

The version on this record is not a live recording of the installation, but a distallation of some of the audio elements in the piece edited and created for the seven-inch medium. 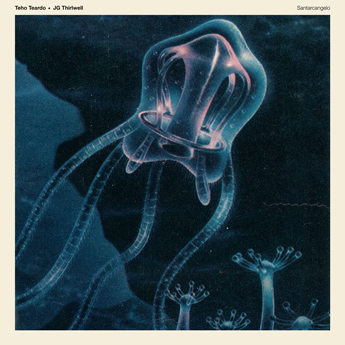